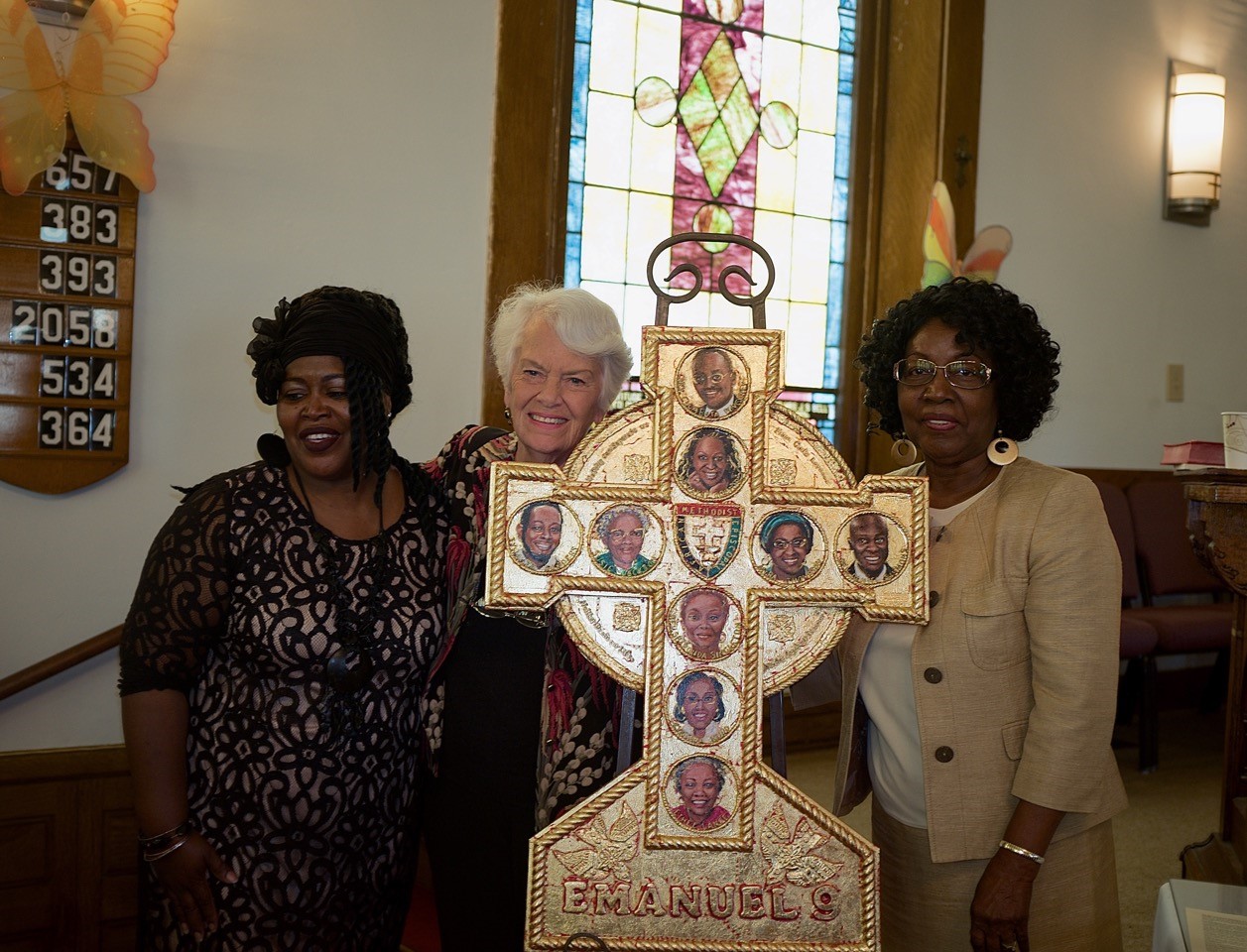 In this picture to the left, Marjorie McIver, sister of the slain Myra Thompson, delivered a message that touched us all: Pamela Purdy who created the icon and a friend of Marjorie McIver.

We the people of the United Methodist Church of Harwich, MA: Dedicate this cross in loving memory of our nine sisters and brothers in Christ from Emanuel African Methodist Episcopal Church in Charleston, SC in the interest of spiritual healing and racial harmony.

The Emanuel 9
Nothing can separate us from the love of God, neither death nor life, nor angels nor demons… Rom. 8:38 NIV

The Emanuel African Methodist Episcopal Church, known as “Mother Emanuel”, was founded in 1816 in Charleston, South Carolina. It is one of the oldest continuous black congregations in the United States.  Though free blacks and slaves were permitted to worship in white churches, in the early 19th century Southern state laws and local ordinances required lawfully recognized churches to be controlled by whites. When a Methodist Episcopal Church decided to construct a hearse barn on a black burial ground, Morris Brown, a free black man,  left his predominantly white congregation in protest. About 4000 black members from this and other Methodist churches joined him in starting the Hampstead Church which became part of the African Methodist Episcopal denomination. The AME Church was founded in Philadelphia in 1816 when Rev. Richard Allen broke from a largely white Methodist Episcopal Church to create this first fully independent black denomination.

The history of Mother Emanuel is one of perseverance in the face of adversity and racial hostility. Brown and other ministers of the church were jailed for violating the South Carolina requirement that free blacks and slaves could not meet or worship together without white supervision. In 1822, the church was burned to the ground after white authorities learned of a planned slave revolt under the leadership of Denmark Vessey, one of the Hampstead’s founders and leaders. It was suspected that the church was the planners’ meeting place. Over 300 alleged participants in the plot were arrested; Vessey along with 34 others were executed following secret trials. The building was torched in retribution for its presumed role in hosting the trouble makers. Rev. Brown was imprisoned  though never convicted. Released after a number of months, he and several other prominent members fled to Philadelphia. Others stepped forward to reconstitute the congregation. However, in 1834, in response to Nat Turner’s slave rebellion, Charleston outlawed all-black churches. The AME congregation met in secret until after the Civil War when a new church was built and renamed “Emanuel” which means: God is with us.

Again, tragedy struck. An earthquake demolished the building in 1886. The current brick and stucco building was built in 1892 on the north side of Calhoun Street with other Post Civil War churches because blacks were not welcome on the south side. Emanuel continued as a leader in anti-racist activities. In 1909 Booker T. Washington, president of Tuskegee Institute and a nationally known leader in the black community, spoke at Emanuel. Fifty years later, Dr. Martin Luther King,Jr would speak at the church urging people to register and vote. In 1969, King’s widow, Coretta Scott King, led a march of 1500 demonstrators to the church in support of striking hospital workers in Charleston. When they arrived at the church, they faced bayonet wielding members of  the South Carolina National Guard who supervised the arrest of the church’s pastor and 900 demonstrators.

On the evening of June 17, 2015, a young white man, Dylann Roof, walked into the church and sat down to join the weekly Wednesday Bible study/prayer group. Though a stranger, he was welcomed. After an hour with the group, he shot and killed nine people: The Rev. Clementa Pinckney, the church’s beloved pastor and respected state Senator; Myra Thompson, the study group’s leader; Cynthia Hurd; Depayne Middleton-Doctor; Rev. Sharonda Coleman-Singleton; Susie Jackson; Tywanza Sanders; Ethel Lance and Rev. Daniel Simmons. Later, photos of Roof surrounded by Confederate flags were discovered as well as a manifesto detailing his racist views and his hope that his murderous act would start a race war. It had the opposite effect. Facing Roof after his arrest, the victims’ families tearfully addressed him with words not of hatred or revenge but of forgiveness and love. As a result, Governor Nikki Haley called upon the state legislature to remove the controversial Confederate flag that had flown in view of the Capitol building. In early 2017 Roof was found guilty in a federal court.

The bios of those who perished:
The Rev. Clementa Pinckney, 41: A state senator and the senior pastor of Emanuel, he was married to Jennifer Benjamin and the father of two children, Eliana and Malana. He was a 1995 graduate of Allen University and got his master’s degree at the University of South Carolina in 1999. He served in the state Legislature starting in 2000; a black fabric was draped over Pinckney’s Senate chamber seat on Thursday.

Cynthia Hurd, 54: According to the Charleston County Public Library, she was a 31-year employee who managed the John L. Dart Library for 21 years before heading the St. Andrews Regional Library. A statement said Hurd “dedicated her life to serving and improving the lives of others.” The system closed its 16 branches Thursday to honor Hurd and the others who died in the shooting. County officials also say the St. Andrews library will be named for Hurd.

The Rev. Sharonda Coleman-Singleton, 45: A pastor at Emanuel, she was also a speech therapist and high school girls track and field coach at Goose Creek High School. Jimmy Huskey, the school’s principal, called her “a true professional … [who] cared about her students and was an advocate for them.” Her son, Chris Singleton, is a baseball player and student at Charleston Southern University. Coleman-Singleton also had two younger children.

Tywanza Sanders, 26: He was a 2014 graduate in business administration from Allen University in Columbia. Lady June Cole, the interim president of Allen University, described him as “a quiet, well-known student who was committed to his education.” Known as Ty, he had worked in sales at department stores such as Belk and Macy’s. Susie Jackson, also gunned down, was his aunt.

Ethel Lance, 70: She had attended Emanuel for most of her life and worked there as a custodian as well. From 1968 to 2002, she worked at Charleston’s Gaillard Municipal Auditorium. A former colleague quotes, “She was funny and a pleasure to be around. And she was a wonderful mother and grandmother.”

Susie Jackson, 87: was a longtime church member and sang in the choir. She and Ethel Lance were cousins. Jackson had recently visited her son and grandchildren in Cleveland, Ohio.

Depayne Middleton Doctor, 49: The mother of four sang in Emanuel’s choir. She had previously directed a community development program in Charleston County. In December, she started a new job as an admissions coordinator at the Charleston campus of her alma mater, Southern Wesleyan University. SWU President Todd Voss said: “Always a warm and enthusiastic leader, DePayne truly believed in the mission of SWU to help students achieve their potential by connecting faith with learning. Our prayers go out to family and friends. This is a great loss for our students and the Charleston region.”

The Rev. Daniel Simmons, 74: Simmons attempted to save Rev. Pinckney’s life by throwing himself on Pinckney. He survived the initial attack but then died in a hospital operating room. He had previously been a pastor at another church in the Charleston area.

A retired Charleston County schoolteacher, she taught Scripture one last time at Bible study at Emanuel AME Church. Her lesson drew from Mark 4:14-20, the Parable of the Soil:

And these are they which are sown on good ground; such as hear the word, and receive it, and bring forth fruit, some thirtyfold, some sixty, and some an hundred.

Myra was the wife of the Rev. Anthony Thompson, the vicar of Holy Trinity Reformed Episcopal Church in Charleston and the sister of Marjorie McIver.